Shabbat HaGadol: Just as the Israelites were redeemed from Egypt in Nissan, the future redemption will take place in Nissan

Nissan is a month of expectation – for Spring, festival joy and redemption, as Rabbi Joshua teaches, “Just as the Israelites were redeemed from Egypt in Nissan, the future redemption will take place in Nissan (Babylonian Talmud, Rosh Hashanah 10b).

Spring has arrived and it seems that this year we will be able to celebrate Passover almost “as usual” but redemption isn’t visible on the horizon.

The special haftarah for Shabbat HaGadol (“Great Sabbath”), the Sabbath immediately preceding Passover, may provide a hint of why.

In the last chapter of formal prophecy in the Bible, the prophet Malachi lists the sins that are preventing redemption: sorcery, adultery, swearing falsely, oppressing workers, widows and orphans –  i.e., weaker classes of society – and discriminating against outsiders and migrants. Later, he adds not paying tithes and Temple offerings (equivalent to tax evasion).  If we think of sorcery as any practice that intervenes in the laws of nature, all of these sins are familiar.

The statement in verse 8 that misappropriating tithe and contribution transferred to priests, Levites and needy equals cheating God deserves our attention. The claim is that the resources that pass through our hands are not truly ours, but rather blessings from God, and we are responsible for using them to meet our own needs and the needs of others. Therefore, depriving public servants (priests and Levites) and the needy of their food and basic needs is theft, from both the people and from God.

Yet Malachi, on God’s behalf, does not mention the poor directly. Why are they omitted? It almost makes it seem that God is more concerned with Godself than with meeting people’s basic needs. More likely, Malachi is tailoring his words to his audience, because he like, all of the prophets, is “a person, not a microphone.” (A.J. Heschel, The Prophets [JPS: 1962 one volume edition] p. xiv). The prophet tempers God’s message so that it will be heard.

People in Malachi’s day (and not only then) seemingly had few qualms about cheating the poor; after all, they have no power. But their fear of God was real. Therefore, the prophecy stresses the sin against God rather than that against the poor. Adjusting the message to the audience might be justified if it achieves the greater goal of supplying the basic needs of the entire population. However, herein lays another issue that delays redemption: behavior that is motivated by a fear of punishment or “what will people say” rather than doing what is right because it is right.

The Passover sacrifice that preceded the redemption from Egypt showed the Redeemer which Israelites were willing to sacrifice and separate from an evil culture in order to be saved. What are we willing sacrifice to help bring redemption?

Hebrew Like the Book of Numbers as a whole, Parashat Beha‘alotecha begins with detailed instructions for organizing the Israelite camp an... 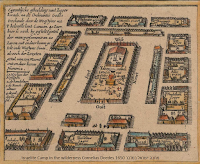